DENVER — In 2017, Nolan Arenado had a Nolan Arenado season: he hit .309/.373/.586 with 37 home runs, good for a 129 weighted runs created plus (and when you play your home games at Coors Field, wRC+ or OPS+ is a requisite measure for any offensive player). Arenado also came through in high-leverage situations — in 49 plate appearances which had the potential for a significant increase in win probability per FanGraphs, Arenado slashed .300/.396/.775 with four homers.

So when you watched Arenado play, dispassionately of course, and your eyes told you he was delivering “clutch” hits, that’s because he was.

To be clear, “clutch” performances can be measured from what’s happened in the past, but are not predictive of what will happen in the future. And there’s an element of randomness to it — how “clutch” a player is from year to year can vary wildly. It doesn’t reflect said player’s talent level. So far this season, Arenado is bearing that truth out, hitting .194/.390/.355 with a home run in 42 high leverage plate appearances. Notice that .390 on-base percentage?

But that’s not all there is to it.

“They’re throwing me pitches down and away, which sometimes I’m taking, but sometimes I’m swinging at. Some of it is approach-wise, not great. I’ve gotta be better in those situations.”

Luckily for the Rockies, a team that ranked 19th in the Majors last season in FanGraphs’ “clutch” stat — which measures how much better or worse a player performs in high leverage situations compared with his context-neutral production — the club ranks third (4.38) in 2018, behind only the Red Sox (5.92) and Mariners (5.12).

In other words, certain players have outperformed their overall production at the plate when the situation called for a “clutch” hit. The player who’s done that the most for Colorado, though he’s not an everyday player and therefore the sample is about half of what it is for teammates that start every game, is rookie Ryan McMahon. His clutch score is 1.62 (1.0 is considered “great” per FanGraphs, and 2.0 “excellent”, where zero is league average).

And to demonstrate the point about the “clutch” stat not being predictive, here are the Desmond, Parra and LeMahieu clutch scores from last season, respectively: -0.14, -0.82, -0.16.

The bottom line? Arenado is getting the superstar treatment (13 walks, four of them intentional in high leverage situations), and often helping the opposition by being overanxious on pitches outside the zone (11 strikeouts). But hitters around him have picked up the slack.

Consider: Arenado’s clutch stat in 2017 (remember, how much better he was than his context-neutral numbers in high leverage spots) was 1.53, fifth-best in the Majors. This year, it’s -0.12. 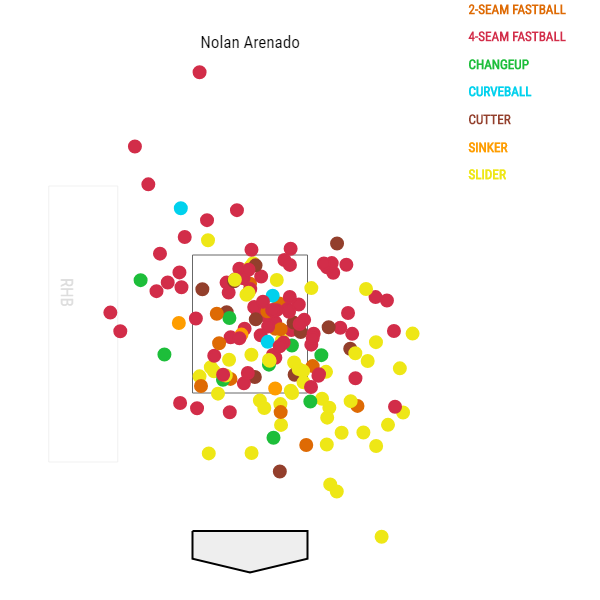 The pitches Nolan Arenado has seen during the 2018 season in situations where he was either the tying run or go-ahead run at the plate from the 7th inning on in a game, or the tying or go-ahead runs were on base.

“Nolan’s Nolan,” said McMahon. “I think teams don’t want to get beat by that guy. They’re probably gonna try to make somebody else beat them. For me, I just try to take a normal at-bat, not try to think about it. As soon as you start thinking about it, putting that one at-bat on a pedestal, it’s just not gonna be good.”

“I want to try to put the ball in play, see it better,” he said of high leverage plate appearances vs. your run-of-the-mill at-bat with nobody on in the third. “It’s not easy to come out of the dugout and try to hit a double or something. You’re just thinking about [keeping it simple].”

Chris Iannetta has been above average this season with a 0.48 clutch score. And as a catcher that was trying to get Arenado out the last few years while with other clubs, he has a unique perspective of what’s happening.

“When there’s something glaring, like how Nolan was hitting in those situations last year, teams are gonna adjust,” Iannetta said. “So it makes it even harder for him to come through in those situations, because he’s getting fewer pitches to hit. That leaves it to us to pick up the slack; if they’re not going to pitch to him, or they’re going to pitch around him, it’s our turn to step up, and I think that’s what we’ve done.”

That’s what the Rockies have done. It’s not predictive of what will happen the rest of the season and, if they make it there, the postseason. But looking back at this point, it’s a big part of what’s gotten them to where they are: in first place in the first week of September for the second time in franchise history (1995).